At Laymani Boxers, our girls spend the last part of each pregnancy and the time spent raising puppies right in the house.  When we don’t have puppies, we rotate our females in and out to ensure that they remember how to behave indoors.

Our adults are under regular veterinarian care.  We value her advice and professional service, so inoculations and tests are all performed at her clinic.  All are routinely treated with heartworm preventative and flea/tick preventative.  Any outside additions to our line are housed separately until cleared and immediately tested for heartworm, parasites, thyroid deficiency and brucellosis (as appropriate).  During their first visit to our vet, they are brought up-to-date on rabies shots and inoculations.  They are also weighed and receive a general physical.

The Laymani Boxers live as a natural community, romping within a 60×90 outside enclosure and several smaller play yards.  They have an adjacent, freely accessible, 16×24 heated indoor space for sleeping and cold weather.  Walks happen on the back-forty acres, a mile-long journey through grassland, surrounded by forest.  Females in estrus, near whelping or feeding puppies need outside exercise, but protection from rough play, so we also have two smaller enclosed areas surrounding two 10×10 shaded kennels with wood-chip-cushioned doghouses.

Their diet consists primarily of a raw diet, along with some dry dog food, plus NuVet supplement tabs.  Pregnant and lactating females receive an additional calcium supplement.

We feel that varying their routine and their food, while providing lots of loving human interaction, makes for happy, healthy Boxers!  Click here for photos of our Boxers at play. 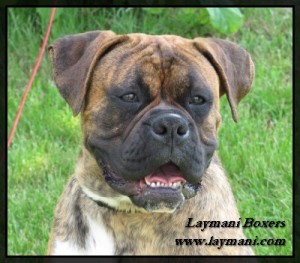 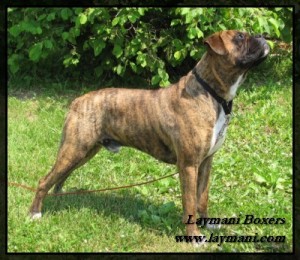 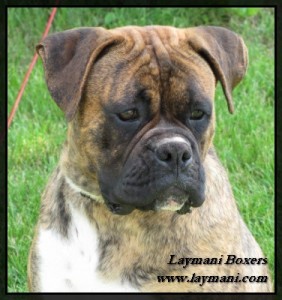 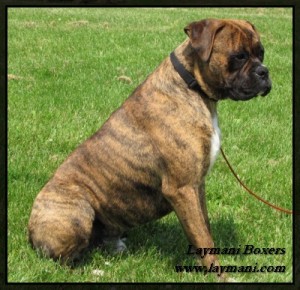 Laymani Thurms Rumoroso is an AKC-registered and DNA-profiled Brindle Male with Black Mask and White Markings.  At over 10 years old and around 90 pounds, Rumor is a big Boxer!  He loves to please and is a big huggy-bug like his Daddy (Thurman).  Rumor is from the Laymani program. 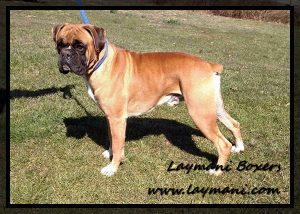 Serrano was born in May 2016 and was 8 months old in the following photos.  He is even-tempered, like his Daddy (Rumor) and about 75-80 pounds.  His Momma (Luna) is also a large Boxer.  Serrano is from the Laymani program.  Both of Serrano’s parents are ARVC Genetic Tested – Negative. 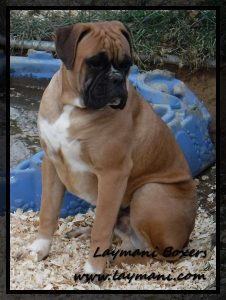 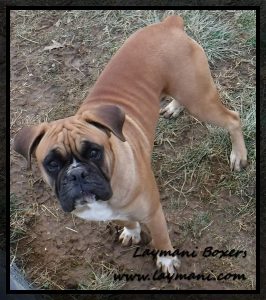 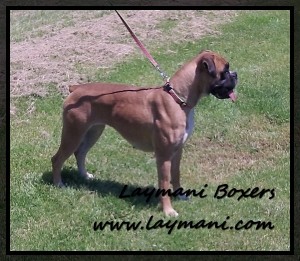 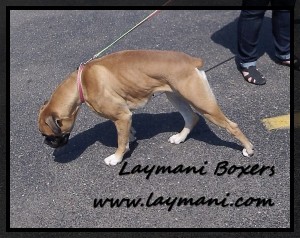 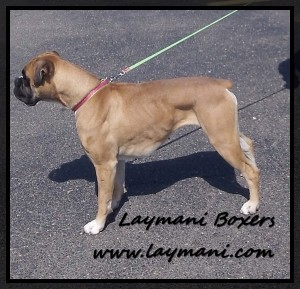 The photos above are from the day Luna came to us.  She had been training for a timed 12 mile run and was quite lean!  Her sire is a European import, and her previous owner wanted a working Boxer, trained and shown in the German style.  We promptly put some weight on that big frame, so Luna now weighs a muscular 70+ pounds.  (As you can see below…) 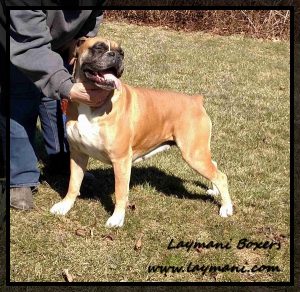 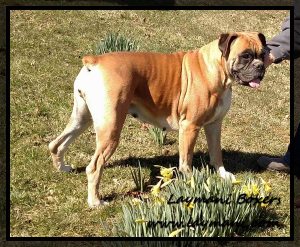 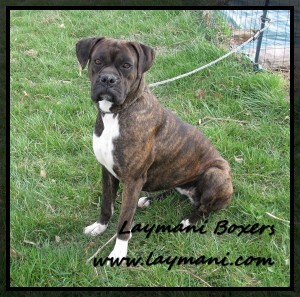 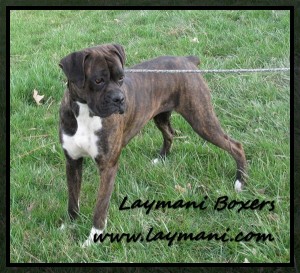 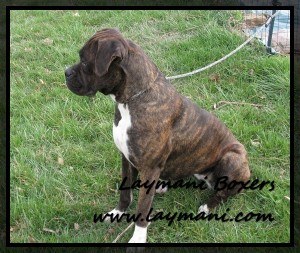 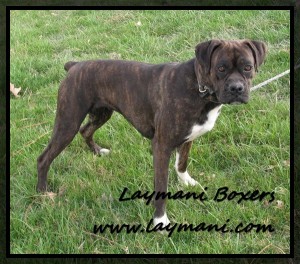 These photos were taken at 10 months old.

She has a large frame and has added considerable muscle since these photos were taken.

Dolce is a Jessie / Rumor puppy from our own program. 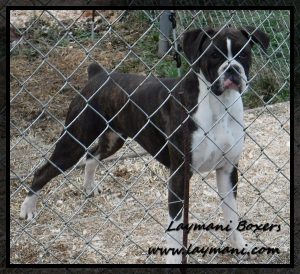 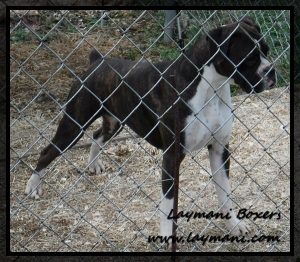 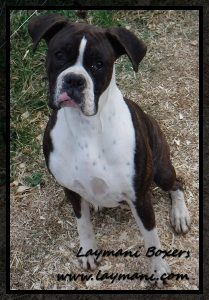 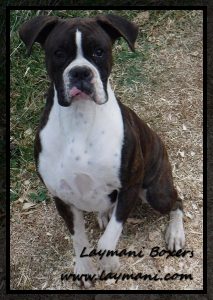 Laymani GiGi Penny’s Promise is an AKC-registered Flashy Reverse Brindle.
These photos were taken at 11 months old.
She is of average size for a Boxer female and joined our Laymani Mommas in the fall of 2017.

GiGi’s Momma is Penelope and her Daddy is Dax, both from the Laymani program. 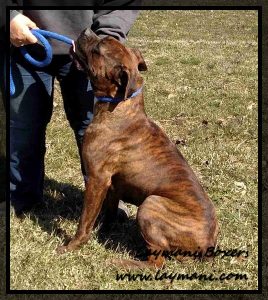 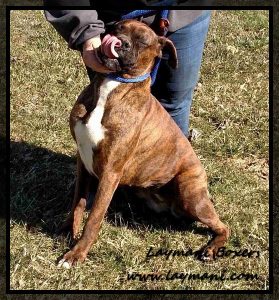 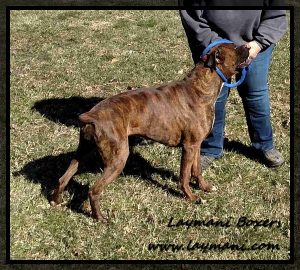 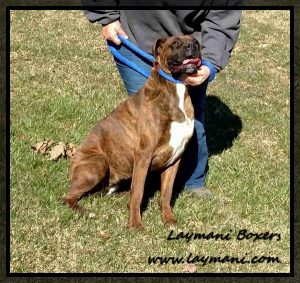 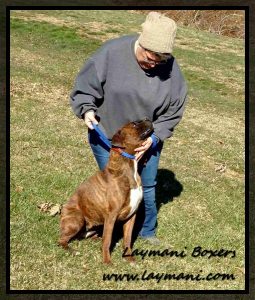 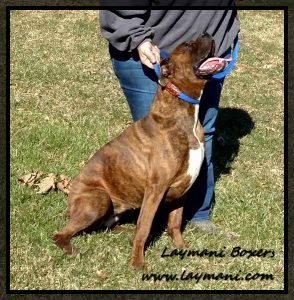 Caccia’s coat has a rich Mahogany tint.  We met both her Dam and Sire, when we picked Caccia up as a puppy.  Her Sire is a very large, Red Mahogany Fawn, while her Dam is Brindle with a Mahogany tint to her coat.
ARVC Genetic Tested – Positive Heterozygote.  Caccia will be bred with Serrano, who is Negative.

Baby, a classic Fawn, has just arrived at Laymani Boxers.  She is a smaller Boxer, though well-built, and already 2 years old.  Baby has not had puppies, yet, so we look forward to her moving into the Laymani Mommas when Luna retires.

We really look foward to Baby puppies, because her Sire was Chase from Laymani. 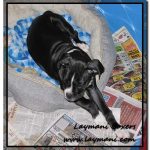 The above photo is from Feb2019, when Onyx was still a puppy.  The lighting makes her look “black”, but when you see her in person, the brown highlights are easily apparent in her coat. 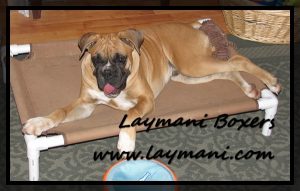 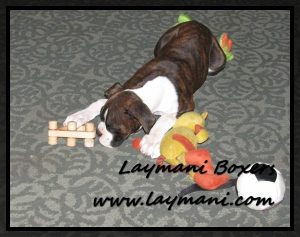 More pics of Serrano and GiGi…

In 2016, we kept two puppies to add the Laymani program.

Serrano is a male Classic Fawn from Luna and Rumor.

GiGi is a female Flashy Reverse Brindle from Penelope and Dax.

To educate our Laymani Families, we have included the… American Kennel Club / American Boxer Club – Official Standard for the Boxer

Please see our “In Memory” page for past Laymani Boxers.